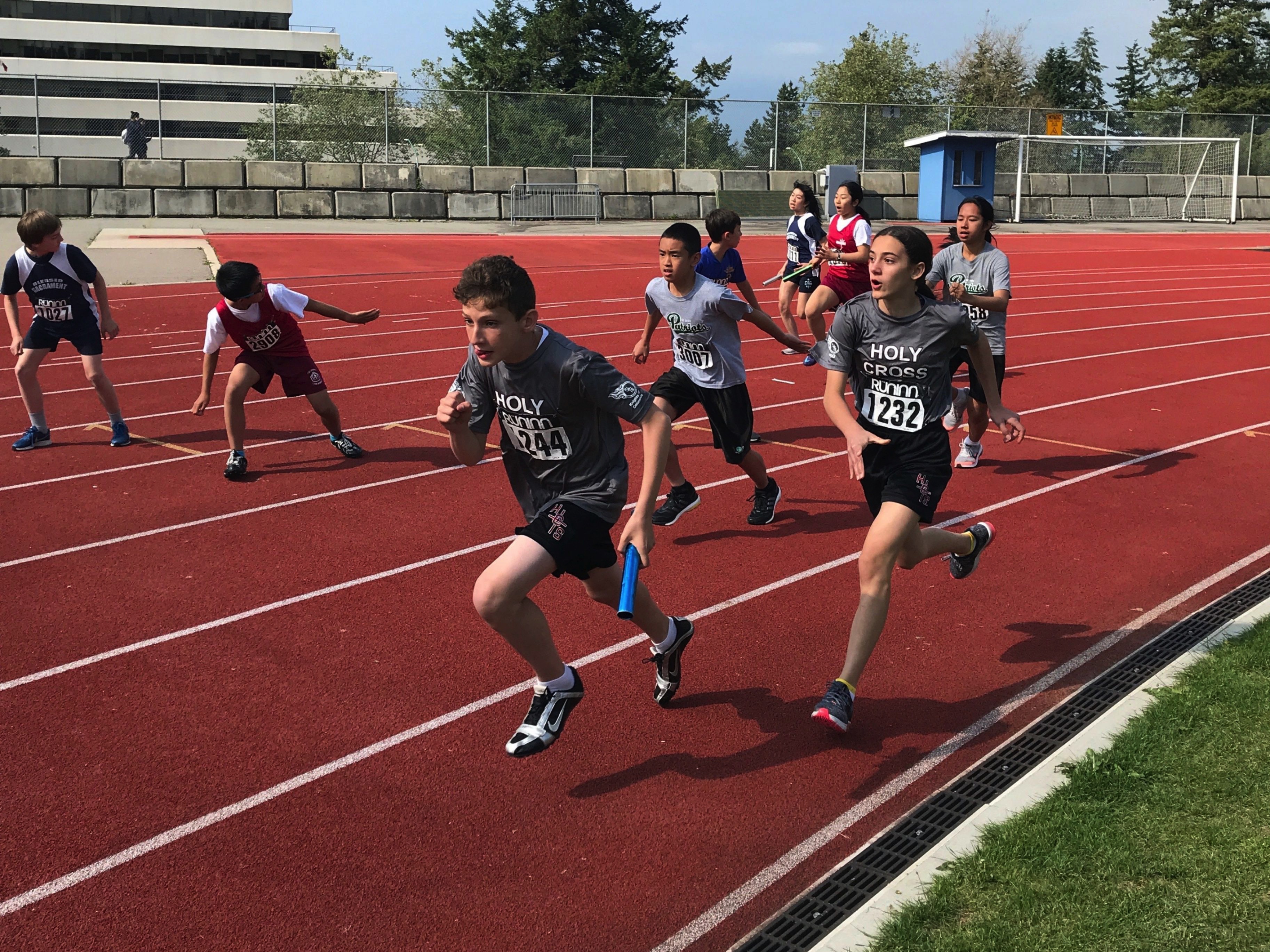 This past Wednesday was the CISVA Track Meet. This track meet is full of wonderful highlights but I would like to share with you one particular moment that stands out.

High Jump is not normally an event that captures a lot of attention. However, the Grade 7 boys put on a display that stopped the track meet. One boy from St. Pats Vancouver and one from SFX put on a show. They kept out jumping each other and they both ended up beating a record that had stood for more than 20 years. As the boys kept jumping, the crowds started to form and the height they were jumping continued to increase. The jumping reached 168 cms and the entire track meet came to a standstill. The crowd of 5000 students and parents stood on attention and the stadium was hushed as we watched them set and break records. But that was not the most impressive feat of the high jump.

What stands out to me is not that the track meet stopped or that the entire stadium stood in anticipation. What stands out is how the two athletes conducted themselves. After each made jump, the athlete (whether from St Pats Van or SFX) would wait for the other to jump. Instead of being disappointed if the other athlete succeeded, they celebrated their opponents success in true sportsmanship. In fact, once they both broke the record they wanted to stop and have it announced as a tie. That type of true sportsmanship is what Catholic sports is all about. It is the pursuit of excellence and achievement without losing sight of the dignity of each athlete.

This is what Pope Francis was referring to when he said sports is a “meeting place where people of all levels and social conditions come together to reach a common aim.” Pope Francis also explains that in sports we find “unity” and the giving of one’s best self. In this way, Pope Francis says we can “open the way to Christ.” So here’s to sports and healthy competition. To read more about what Pope Francis says about sports click here.

After school on Friday June 7, AT 3pm, the Gr. 7s will have their last fundraiser of the year. Please come out and support them.

Our school has purchased the uniform stock from Neat Uniforms and it is available for sale starting on Tuesday, June 4th. The items are good for two years as we make the transition to the new uniform. All sales are Final Sale. No refunds or exchanges. The items are discounted as a result. We are asking families to consider purchasing items first through the school and then if an item is not available in our stock they go to Cambridge Uniforms. The sale will start June 4 from 8:30 – 9:00 and from 2:30 – 3:30 pm and will run daily until June 7 after which items will be purchased from the office.

Cambridge Uniforms asks those families who plan to visit their Dollarton location for their uniform fitting to book an appointment online. This helps them to ensure that they have the time needed to service each family to their best ability.

To book an in store fitting at their Dollarton location families may click the link below:

St. Jude School is counting on each family to do their part and sell the Spring Raffle Tickets. Your children will benefit directly from your efforts. Please work on selling them to other family members, to friends, co-workers, or buy them yourself. If you are having trouble selling the tickets then please reach out to our Fundraising Parents who can assist you. You have until June 7 to sell your tickets!

The draw for the Spring Raffle will be hosted on June 14, 2019. We do encourage as many people as possible to come out for the draw. However, if you are unable to make it you can still win the draw and claim your prize. We will call the winners and we will hold the prize for those individuals.  PARENT

We are nearing the end of the school year for participation hours. Emails are currently being sent out to families. If hours have not been met, participation cheques will be cashed on June 30, 2019. For more information please contact the Parent Participation Coordinator at eparticipation@stjude.ca

Our PEC members have been voted in by acclamation for the 2019-2020 school year. Our PEC for 2019-2020 is:
Richelle Akol
Anita Hua
Leah Wong
Ann Tang
Desiree Suganob
Maria Paredes

A special thank-you to Ruby Villamin for her hard work on the PEC for the last few years.

Based on the current programs offered at St. Jude School, a Criminal Record Check is required for the following volunteer opportunities and parent participation categories:

If you plan to volunteer for the school or your parent participation involves any of the above, you will need to complete a Criminal Record Check. This check is free, valid for 5 years and can be completed online. Simply click on the link below and follow the on screen instructions. You will need to enter the Access Code to be identified as a volunteer at St. Jude School.

If you are not able to complete the form online, it will prompt you to print the page.  Please bring the printed pages and your picture ID to the school office for verification and we will fax it in from here.

Students from St. Jude School battled hard in the relays. I am proud of our students for the sportsmanship and respect. They competed hard. Track and Field wraps up at next Wednesday’s CISVA Finals meet.

There are no upcoming events at this time.

There are no upcoming events at this time.