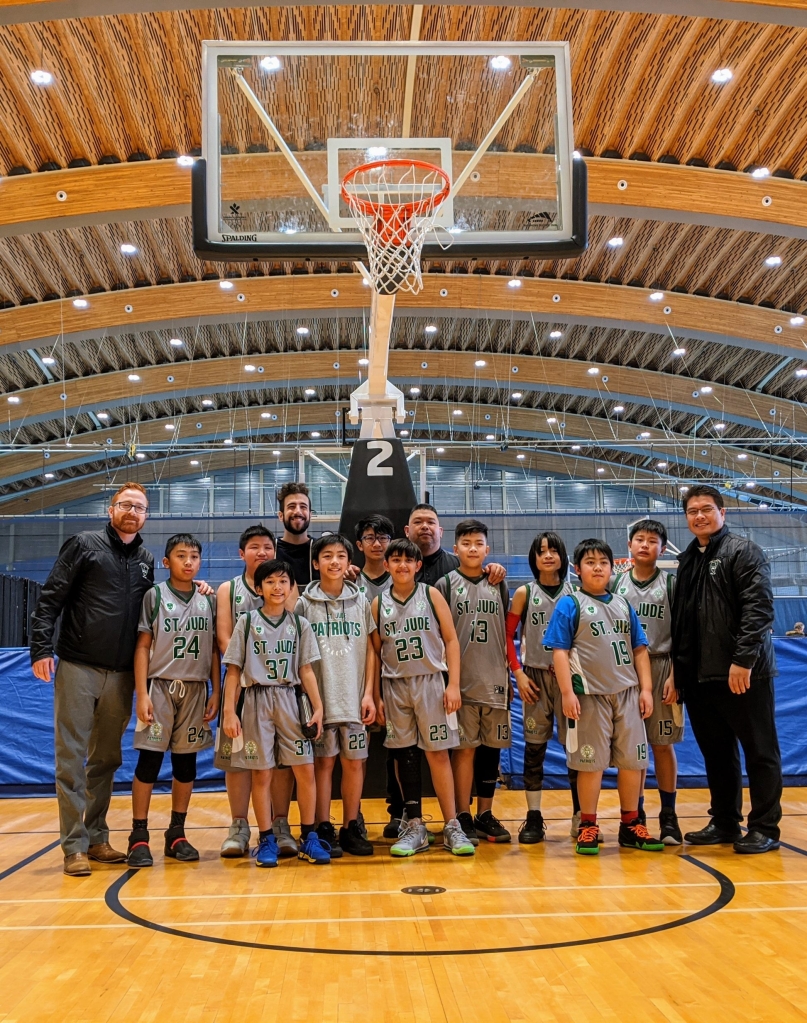 The Kingdom of God

There was a single moment from our weekly school mass that profoundly resonated with me. It came during the reading of the petitions. Petitions are prayer intentions that the community offers up to God. At St. Jude School, we often have an intermediate class partner with a primary class to do the readings. At this particular mass the Gr. 4 class partnered with Gr. 1. During the reading of the intentions, one of the Gr. 4 students discretely and respectfully assisted one of the Gr. 1 students. It was clear that there were some larger words for the Gr. 1 student to read. The Gr. 4 student followed along in the background while the Gr. 1 student read and only whispered the word when the student paused due to not knowing how to say it. It was a gentle and kind way of assisting a younger student.

Why does this moment strike me as so profound? It is not large heroic acts that make one holy. It does not take miracles to build the Kingdom of God. Rather it is the culmination of small acts done out of kindness for another. Jesus reminds his followers that the Kingdom of God “is like a mustard seed that a person took and planted in the garden. When it was fully grown, it became a large bush…” The US Conference of Bishops explains that Kingdom of God starts small and then goes through a “marvelous expansion.” The marvelous expansion is what happens when small acts of kindness spread throughout the community. Each of us then is called to holiness as each of us is capable of performing small acts of kindness.

B.C. announces 13th  confirmed case of COVID-19, a woman in her 80’s who is in critical condition in the intensive care unit at Vancouver General Hospital. She had recently traveled to India and Hong Kong  Please see joint statement from Health Minister Adrian Dix and Provincial Health Officer (PHO) Dr. Bonnie Henry: https://news.gov.bc.ca/releases/2020HLTH0060-000380

In a Mar. 3 joint statement, Provincial Health Officer Dr. Bonnie Henry advises: “Schools should be increasing cleaning and hand hygiene, educating students on respiratory etiquette, in addition to putting mechanisms in place to support students who may be away for extended periods.”

In a Mar. 3 joint statement, Dr. Henry advises: “British Columbians with upcoming travel plans should continue to monitor the Government of Canada travel site for the latest travel advisories: www.travel.gc.ca/travelling/advisories

“Travellers should understand that as global efforts to contain COVID-19 continue, the availability of health care services in some areas may be limited and travel restrictions may be put in place suddenly. We are asking all travellers returning from Iran and China to self-isolate for 14 days upon their return home to Canada. All other travellers who are returning to, or visiting, B.C. from outside Canada should monitor themselves and their children closely for symptoms and if any arise, limit their contact with others and call 811. This is an important way to reduce the possibility of transmission of illness to others.”

This year, the Gr. 7 Girls reached the quarterfinals at the Richmond Oval for the first time in very long time. The team was coached by Miss Handy, herself a NCAA Collegiate Athlete who played basketball at the University of Vermont. In speaking with Miss Handy, she commented that she is so proud of how the girls improved throughout the season and how they supported one another as teammates. As a principal, I am also very proud of the team. It was so good to see them get to the Quarterfinals, making them a top 8 team in the CISVA. The girls fell short to St. Helen’s who went on to win the entire Championship! We are all very proud of the Gr. 7 Girls Basketball Team!

For only the second time in school history, the St. Jude Basketball program had a team in the CISVA Championship Final. The Gr. 6 Boys made short work of St. Pat’s Vancouver in their semi-final match. The boys then faced a tough challenge in St. Andrews. The boys competed and battled hard and it was a close game throughout with St. Andrews pulling ahead in the 4th quarter. While the boys were sadden in defeat, the community stands behind them proud of their efforts and accomplishments. They truly represented our school well. There are 41 elementary schools that make up the CISVA and for our boys to finish second out of 41 is something we should all celebrate. The future of basketball at St. Jude School is indeed bright!

St. Jude School, with the help of El Shaddai, is in the process of purchasing new tables for school and parish events. We will therefore be selling our wooden folding tables at $25 each. These tables are heavy duty. Please email the office (office@stjude.ca) if you are interested in purchasing tables. Tables will become available for purchase once our new tables have arrived.

STUDENT LED CONFERENCES MARCH 13 AT 9:00AM

Student Led Conferences will be held on Fri, March 13th.  Regular classes are not in session on this day.  Students are to be in uniform when they come to the conference.  Please click here to book your appointment time.

JUDO IS COMING TO ST. JUDE SCHOOL FOR SPRING BREAK

Burnaby Judo Club is pleased to offer an Intro to Judo Camp during the Spring Break at St. Jude School. NO EXPERIENCE REQUIRED. This intro camp is only offered to students in Grades 1 to 4.   Come check it out.

STATIONS OF THE CROSS AT ST JUDE PARISH

Join St. Jude Parish every Friday at 7pm for Stations of the Cross. This is a prayerful way to enter into the season of Lent.

The meeting starts at 6:30 pm. Please email Mrs. Collins if you have any questions.