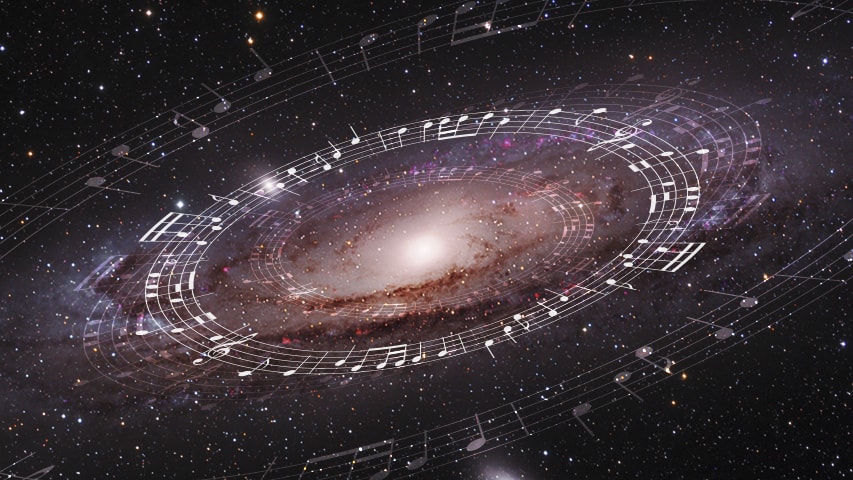 “Nothing exists without music, for the universe itself is said to have been framed by a kind of harmony of sounds…” – Isidore of Seville

Each morning, rain or shine, I go for a walk. This time spent walking under the canopy of stars before the first light of the day has become sacred to me. During my walks, I listen to audiobooks. This past week I listened to One Native Life written by Richard Wagamese and narrated by Christian Baskous. It is a powerful reading and there have been many instances where I have been struck by the wisdom of Wagamese’s reflections and insights into the human struggle and what connects us all. If you are looking for a book to read or an audiobook to listen to on your commutes, I strongly recommend it.

I listened to Wagamese early this morning under the dark skies when most people are still sleeping in their warm beds. This morning one of his reflections was on the word “universe.” As is often the case, I will listen to his story, but if it really impacts me, I find my mind wandering down different paths of thought. When I think of the word “universe,” I immediately think of oneness as the first part of the word comes from “uni” meaning “one.” But how can something be “one” when it contains so much diversity and difference?

Scanning the current events of the day I am struck by how divisive our world seems to be coming. Covid19 has only amplified this further. As I was walking though and listening to the story being spoken, I was struck by the concept of an orchestra as it relates to a universe. A full orchestra is an ensemble of all sorts of instruments and musicians all coming together to produce one song. Each instrument has its role and has its beauty. How ridiculous would it be for us to debate if the clarinet was more important than the flute? The clarinet adds its own beauty to the music as do the flutes. And while I acknowledge that some may prefer flutes over clarinets or vice versa, one’s particular preference for an instrument does not diminish the value of the other. Furthermore, while some instruments may stand out for its solos at various parts in the music performed, the songs themselves would become rather dull if we only had one type of instrument.

If we take the metaphor of the orchestra, the universe of an orchestra, and apply it to humanity we might be able to learn something. Humanity is served well by its diversity of cultures, its diversity of ideas, and its diversity of experiences. Just as it is silly to say the clarinet is better than the flute, so too is it silly to say that one type of human is better than another. If an orchestra does not resonate, then look at nature. Would we say that a pine tree is better than an oak tree? No! This too would be foolish. Both serve purpose and both have beauty. All around us we see that God created a world in which life was meant to shine and meant to find its fullest expression in living according to its purpose. The pine tree does not try to be an oak tree and the oak tree does not grow envious of the pine.

Let us then see humans as part of a divine orchestra with God as our conductor. If we can adopt this mindset, might we see those who are different as holding intrinsic value and worth? Might we see that we all belong? Might we see that we each have a role to play in producing harmony? Might we see the folly in trying to force others to be something that they are not? Let us join together in the song of the universe.

I would like to take this opportunity to explain why CISVA administrators have decided to not allow spectators to our sporting events and why many of us are moving towards virtual Christmas Concerts. As you are well aware, many indoor gatherings have resumed without restrictions on size provided that people show their proof of vaccination before gaining entry. This is true for restaurants, for hockey games, and for your child’s community sporting events. For example, when I go watch my son play basketball for Drive this weekend in Richmond, I have to show my proof of vaccination to gain entry.

We are grateful that our students can play sports. For the upcoming basketball season, the school will look to stream the games much like we did for our school masses last year. If you have any questions about our school and COVID-19, please feel free to contact Mr. Chris van der Pauw at cvanderpauw@stjude.ca

WE SAY GOODBYE TO MISS STEVENSON

We thank Miss Stevenson for her time with our school. Miss Stevenson was with us for the months of September and October in the position of Educational Assistant and After School Club leader. Unfortunately, she has left this position due to personal reasons and we wish her good health and well being.

For the past few weeks we have been doing our best to cover the absence of Miss Stevenson in the classroom and in After School Club. We will continue to offer After School Club to our parents but its schedule may be impacted due to the availability of staff. Luckily, Miss Vanessa has agreed to help us out, as have some EAs and for that we are extremely grateful. We are looking for a more permanent solution but please understand that this may take some time. Here is the schedule for next week:

Congratulations to both our Gr. 6 and Gr. 7 Boys for advancing to the final 8 for Volleyball in the CISVA Championships. Our boys will compete on Tuesday, November 23, at Harry Jerome. Presently, no spectators are allowed at any CISVA sporting events due to our inability to check for vaccination status.

We are excited to welcome kindergarten registration for children born in 2017, turning 5 in 2022. These children will begin kindergarten in September, 2022.  Please click on our Admissions Top Tab to access the New Family Application.

We currently have the following items available for sale in our Consignment:

If you would like uniform items to be sold in consignment, they must be in good to excellent condition. They need to be the current uniform and not the old one. You will need to set a price and fill out a form. Please contact Mr. van der Pauw if you would like an item to be sold. From time to time we will post what is available for sale in consignment.